skip to main | skip to sidebar

We don't want to buy any carpets... 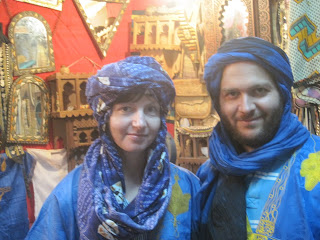 We're in the wondrous coastal town of Essauoria staying right in the middle of the Medina, which is basically the walled-in older part of the city surrounded by ramparts. It is very charming with its streets lined with vendors selling carpets, jewellery, tagines, spices, clothing and just about everything (including butcheries with carcasses dangling and a manic fruit and veg market).

The buildings are square and white-washed, many with blue shutters and blue window frames. Off the main streets, narrow alley ways veer off full of mystery. There are cats everywhere. People are incredibly friendly and generous. No cars are allowed but people fly past on bicycles and scooters.

As to the origins of this photo...a guy called out to me on the street today, he spoke very fast and a strange kind of English and I wrongly assumed he was talking about camels and going into the desert, something we both want to do. Actually he just wanted to sell us Arabic carpets. I made the mistake of going into his shop and dragging Larna in too. He dressed us up in these traditional costumes, offered us tea and then tried to sell us carpets which we had no interest or desire to buy. He persisted, it was awkward, but at least we got to wear these cool outfits and look like real nomadic Arabs.

We spent most of yesterday getting here on the bus from Casablanca passing through little towns along the way with the famililar square design and white washed walls. As night fell we stopped at a one horse town for a break. People were congregated around eating houses devouring plates of meat. The slaughtered carcases were on display next door. People are all over the place, walking in the road, riding their scooters or bicycles. Even in the pitch dark as we approached Essauoira, there were people walking along the dusty sidewalks. The bus had to swerve a few times to avoid running one or two down.

We plan to stay here until Sunday. We have yet to explore the Jewish area, the beach or the fishing village. We are staying in a 'ryad' - a traditional old house with a big atrium in the middle and two floors supported by stone pillars. It is quite beautiful. Breakfast is fresh orange juice, coffee, these traditional pancake/naan-like breads, jam and butter. Delicious.
Posted by Larry and Larna at 1:33 AM 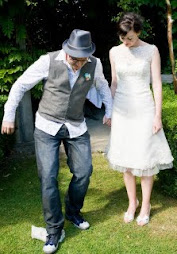